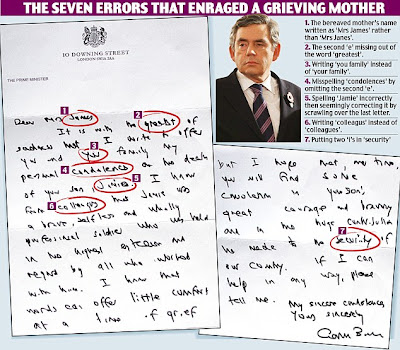 
Right, I have an hour or so before I need to go. I wasn't going to bother writing but I simply must.

I've had a perusal around the blogosphere and as expected the main topic today is Gordon's sloppy letter and the backlash.

Now, I am well aware that I'm known as an occasional 'tin foil hat' wearer. Some of my views can be wildly different from others and I like to throw in a curve ball to the debate now and again. And today is no different.

The differing opinions of the 'letter-gate' incident range from the 'he's disabled, you know. It's not his fault' to the 'he's a hopless twat and ot should have been checked first'. All fairly valid points.

But, (pulls on tin foil hat), here is my take on the whole thing.

Think about it. Do you seriously think that the PM would just send out a letter off the cuff without any of his 'advisors' knowing about it or checking it? He has his own copy, no one copies a 'personal' letter!

The reaction he was looking for was more along the lines of 'that poor man must be so tired trying to save the world. Look, he has made so many mistakes in his letter. He must be a brave soul to battle on, with his bad eye and that. And it must be from the heart because he wrote this himself and no one checked it before it went out. What a good caring, hard working PM we have. He's got my vote...'

If I am widly wrong, just ask yourself this. Would you put it past the bastards to try it?

Sorry folks, I've had to put the word verification on. Fucking spamming bastards.

But my main feeling about the whole thing, with the country's finances down the shitter and three weeks to go until Broon becomes a Member of the European Council, sworn to uphold the aims and objectives of the European Union, ceasing to be the head of our elected government in any meaningful sense, is, “who gives a flying fuck whether he can bloody spell”?

Jesus I never thought about in this way. I did do an article on this topic myself and near the bottom I asked, "How low can Gordon Brown go?"

Thanks I think you have just answered my question.

Nothing is too low, so, maybe, just maybe, you're right.

Have you thought about a career in politics? Is your name Malcolm Tucker?

Not a set-up. Too complex. Politiians always look for a press hit. Not a negative story which may turn out to be a hit with some people.

The whole thing is just piece of press nonsense anyway - as are most of the alleged spelling mistakes.

Gordon Brown writes like I do, like most people do these days. Our handwriting is indecipherable because we have forgotten how to write by hand - because we so rarely do it.

Wow, I can see it now, Rab. These hats really do make a difference.

No the spelling mistakes are real. And I agree the standard of writing has come down but the point is the PM made a hash of a very sensitive letter.

But you do wonder how low this PM would go just to climb back up on the polls so Rab might just have a point, dirty vest or no!!!!

Indy - my handwriting is crap as well, but I make dammed (sic) sure that I spell better than he does. And if I do make some mistakes I will tear it up and start again.

It woz the beer wot dun it.

I think you hit the nail on the head, and i am glad it backfired on the one eyed cunt!

I was enjoying my after work pint this evening and had exactly the same thought.

Nothing would surprise me with these people.

Now fuck off and look after the Mrs.

No, it wouldn't surprise me. Welcome back soon.

Think you may have hit the nail on the head, though I hadn't looked at it that way myself. No depths to which this morally bankrupt, depraved & corrupt PM wouldn't go if he thought there was something in it for him.

Another possibility, if we're getting into tin-foil hats, is that the Sun's reaction was exactly what he was looking for.

I expect Brown to get a slight bounce in popularity out of all this. Just about everyone I know hates him, but thinks he's being treated unfairly over this (and over the lack of nodding at the Cenotaph, the fuss over which is perhaps even more ludicrous and insincere).

He'll have learned his lesson, though: in future, just get an intern to dash off mailmerged letters to the bereaved, the way Blair and Thatcher did.

My Tinfoil Helmet version of this particular fuckup is that it was indeed a setup.

Not necessarily to gain the sypathy vote, especially with Springburn in the offing but that it was part of a subtly orchestrated plot to give Gordon a way out.

It has been decided that he will go but his going will be orchestrated not to appear he was hounded out.

Hence the slow but steady leaks about his health (mental and otherwise) and his need to spend ore time with his family etc.

He will do and "Ernest Saunders" and will metamorph into a position with the World Bank or summat similar.

It's the 232nd condolence letter that he has written and all the rest had similar poor writing and spelling mistakes so I doubt if it was something planned. The majority of the letters were written when The Sun was a Labour supporting paper. Even Gordon couldn't write hundreds of letters in the hope that eventually a grieving mother would take offense and he could then be pensioned off into the EU retirement home.

It does smell somewhat, perhaps the sympathy vote for the one-eyed presbyter.

(Kind of. What I'm getting out of that poll is that people don't hate him any more than they do already. Probably because they can't.)

Agree with you Rab,even the astroturfers were out in force all over the interweb in quick order,just as if they had been ordered for that day,me cynical, yes.

A few weeks ago, there was speculation that the sight in his second eye was failing. Brown denied it. He said his eyesight was just fine, thank you. Now, he's trying to blame it for the misspellings.

He can't have it both ways.

But that is exactly what he wants in everything. Truth has no objective meaning in this man's world. What he says is the truth: that's how he sees it.