The Police are scary. 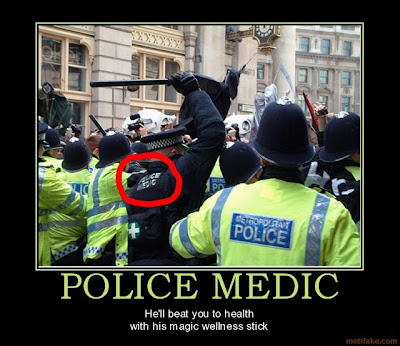 Did anyone see 'Coppers' on Channel four on Monday night? If you missed it, catch up here. I've watched most of the programmes so far and, to be honest, none were any surprise to me. Particularly Monday's episode. Although it was scary, it was no surprise.

It focussed this week on the frontline cops who deal with protests, public order etc. The ones who dress up like a paramilitary robo-cop and get off on batoning those who dare to use their right to protest.

It was scary because of the type of person that have become police officers and ended up on the front line. The bullying type with a few 'issues'.

Our police have now become their police. A tool of the state to be used against us and it was plain to see that the officers themselves have totally absorbed themselves within the logic of the state. The police are part of our enemy.

You probably read Inspector Gadget's blog. I have noticed a shift in attitude by him and his police buddy commenters. In many posts he laments the fact that the police are ill equipped to deal with public order offences and his commenters agree with him. They pine for plastic bullets, water cannon and tear gas to keep us, the great un-washed, in our place. They also have called for the police to be routinely armed.

It is very simple. The police are our enemy and should be treated as such. They care nothing for you or your family. They are part of the state apparatus that requires dismantling.
Dribbled out by RantinRab at 10:25 AM

I gave up with IG ages ago, and I'm certainly not giving him the benefit of any more traffic.

In general I agree with your comments, but one snippet I happened to see recently did show at least one of them as a reasonable person. It was the series about 2 wheeled cops & paramedics. One was sitting in a layby pointing his speed gun up the road. "White Van Man" comes steaming past, and he gives chase.

When stopped he asks the driver what the limit is for his class of van, and the driver correctly answers 60mph. Then he turns the gun round to show him what he was doing - 105 MPH!!! "I didn't realise".....I didn't think it would go that fast" Cop assures him that many can and do. But throughout this he was perfectly calm and polite.

Some years ago I was unfortunate enough to be present when a policeman had to inform my friends family that he had just been killed in a road accident, after being hit by a speeding truck. I wouldn't wish that job on anybody, so it's a real tragedy that the police in general have become what they have.

Most officers I deal with do as I ask, they only become difficult if they don't know what to do and as a consequence have to rely on 'training';)

The police are what they are. They are indoctrinated from when they join the force and encouraged only to have friends on the force. I was arrested for the first time when I was nine years old. I had been knocked over by a woman who despite her initial tears and sadness, when she found out I was ok apart from a broken leg decided she didn't want to pay the insurance premium on her crap car. My mother sought out a lawyer as she realised I was being read my rights who said hang on what cc was your sons motorcycle she said no it was a push bike - he was on his paper round. The lawyer, just laughed and said this must be a joke. a few years later I remember being in the bar on my dads ship as it docked in Liverpool and two of the senior drugs police were on board after the normal search for contraband. Which meant they would come into your cabin with dogs and check everything, even removing ceiling panels. After being brought lots of drinks by the officers, (ships rates, at that time it was about 10p for a double). They shook hands and left. They then phoned the police at the dock gates and informed their colleagues who was over the limit as they drove home. Never trust a police man.

your scary hope a Policeman wallops you with his truncheon!!

Gadget is well loved and deeply respected by all good citizens.

A dedicated servant of the state, he will spam/censor/edit any remark sent to his blog having the temerity to challenge those views.

Dr Melvin's observation is precisely why I gave up visiting IG's blog.

Until recently I probably wouldn't have fully agreed with you but I do now.

Being arrested for having a small locking utility knife on my bunch of keys whilst being stopped for having a slightly non standard number plate, really pisses you off I can tell you. I was simply on my way to Tescos to do the weekly shop and next thing I'm spending 4 hours being 'processed', what a fucking great way to spend the taxpayers money Policing, Wankers!. A week later I'm attending a football match my son is playing in and hey ho I'm singled out and searched as I may be carrying an offensive weapon and be a danger,FFS!! I have never comitted an offence at a football match but now I'm 'in the system'

All coppers are fucking bastards.