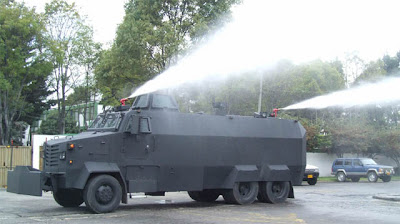 Coming soon to a street near you, if it goes to plan...


Britain is an angry nation. Step outside your own front and the evidence is all around you. Arguments in the street there, a small incident of road rage here. You can hear the mutterings of people in the lengthy post office queue, pissed off people being forced to wait for a few minutes.

Nothing new there you say.

But we are angrier than ever. Personally speaking I hate people. "Get out of my fucking way" I think to myself when anyone has the audacity to walk in front of me. I find myself swearing at the television when watching something that I disagree with. In the car I constantly shout and swear at other cars for not indicating at roundabouts or cutting us up. And I don't even drive, the Wife is my chauffeur!

I wasn't like this before. As a younger man I was fairly mellow, nothing much bothered me. I would say to myself I was angry because I was getting older, more cynical. The innocence of youth had left me and was drifting in the ether of times past.

But I'm not so sure that's why. Everyone is angry these days and, to be fair, we have plenty to be angry about.

And that's the problem.

There is so much to be angry about in Britain today and it suits the government. The collective anger isn't being focussed on one large issue, as it should be. The smeargate and expenses scandal, the incompetence of Gorgon and his cronies, the rise to power of Lord Fondlebum of boyes. The erosion of our freedom and the further acceleration of our country into a authoritarian police state. That's what we should ALL be getting angry about.

Instead we have the distractions. Issues that divide us, issues that we talk about with friends, workmates or fellow bloggers. All sorts of things. For the Heat magazine crowd we have the obsession with celebrity and the Big Brother/Britains Got Talent crap on the TV to keep them occupied. The Daily Hate middle class oiks get themselves lathered into a frothing mass of indignation with stories of immigration/assylum seekers and house prices. The working man now has the wildcat strikes at Total and the Royal Mail strikes to talk about. The chattering classes have the Iran issue to discuss at the next fundraiser event. Everyone hates bankers.

Now we are being provoked. The long awaited, much discussed 'Summer of Rage' is nearly upon us. Why else would a video showing heavy handed policing that was recorded last August suddenly pop into the public domain now? Do the powers that be want us to focus our anger against the police? Over the past year or so, there has been numerous stories about police brutality, missing shoulder numbers etc etc.

So, everyone is angry. Now for the next stage of the plan.

A season of public disorder is just what they want. 'Emergency' public order legislation is ready to be rushed through to be used against everyone, regardless if you are caving in the local cop shop window or if you are a blogger. Another heel to stand on the neck of freedom and liberty. Identity cards will become mandatory for all, police will have carte blanche to stop and check. "Papers please" will be the demand. More CCTV and more data base state. More excuses to moniter and control us all, comply or pay the penalty.

I'm sure many of the good subjects of Britain would be delighted with a few riots, giving it to 'the man'. Showing the bastards that we've had enough.

But I fear that's exactly what they want us to do.
Dribbled out by RantinRab at 9:49 AM

"Everyone is angry these days and, to be fair, we have plenty to be angry about."

It's an interesting point although I'm in 2 minds about it. Part of me wonders if they take the living piss because they know that the British are not good at protesting. Iranians go mental at the election results, and we get almost every single liberty taken away and do what?

Part of me then thinks, how much more will the British tolerate and perhaps this is showing through anger as you point out?

I get angry over minor silly things too. Tesco trolley bashing being one of them!

Don't agree that 'they' (whoever they are) have a masterplan to get the good people of UK out on the streets with pitchforks this summer but I do agree that more and more Draconian measures will be introduced to curtail liberties in the coming years. We can't afford ID cards now but after the next 'horrifying' incident you can rest assured that they'll be indespensible regardless of cost (in £'s & liberties).

I'm not really a conspiracy theorist though so I don't see some malevolent guiding hand behind it all just the government reacting in firefighting mode to the social ills that the policies of the last 10 years have caused.

The trouble with Brits, is that we do tend to roll over, no matter how much shit is directed our way. I do think however, that the way things are going, we will break, and God help anyone in our way then.

I suggest, before things get too bad, as a way of showing our anger at what is happening, we have a national photograph a police person day, and how about a new hobby of collecting police id numbers? Of course "they" will not like this disobedience, but we have to start the fight back to sanity somewhere.

Rab sadly you are correct.

I find myself gettig increasingly angry at silly little things which should not, in the normal course of events, cause me to raise so muich as an eyebrow.
As one your previous commenters said, I'm not a conspiracy theorist but things are beginning to pile up, one on top of another.
When the dam finally breaks, just watch what happens!

Rab agreed but the ZOMO won't let you move once the hammer drops.

Anonymous, what do you think all that delivering by van shit from the big sooper markets is for. Once your banged up indoors and the shelves are empty THAT'S who'll be delivering your rations.

BTW one raised eyebrow and you'll get to starve for a couple of days before the 3am rap on the door as the lead pill pharmacy take you away!!!

I agree with the sentiment, and I'm sure 'they' would love to arrange a 'false flag' type episode in order to clamp down.

But, even with that, I think the British public are too lethargic to do anything.

They're waiting for X Factor to come back on.

Nah, I think you're wrong on this one.

A long hot Summer is forecast, so there's bound to be a water shortage.

Definitely. I notice people are much more laid back here in Spain.

Do you know that Britons take the most anti-depressants too and we've just been accused of being the cocaine capital of Europe (Spain second but the Coke is alot purer here, not that I partake at my age anymore :). Ironic when you think that Spain is a stones throw away from Africa!

Brits are also the most miserable. We used to have a sense of humour, but we are not allowed to laugh at anyone anymore!

I agree entirely Rab. Why exactly did 'they' flag up a Summer of Discontent' a few months ago?

Your bang on when talking about shouting at the TV, I thought it was only me that done that. And supermarkets and shops get on ma tits. I know exactly what I want to buy but am hampered by wimmin treat the aisles as a creche and clog them up as they stop and natter about fvck all.(Their husbands are just as bad, barstewards!)