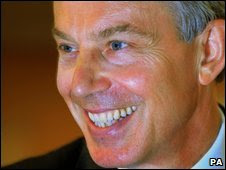 I nearly fell off my chair when I read this story on the Al Jabeeba site. In fact, here is the headline, make sure you have a soft landing...

I have a couple of issues with this 'assumption'. Since when has the EU, (spit), had a president and when were we asked who we would like to be president?

Tony Blair will be the UK's official candidate for EU president, Baroness Kinnock has apparently confirmed.

The post will only be created if the Lisbon Treaty is ratified by all EU states - Ireland is to hold a second referendum in October.

The bitch Kinnock seems a tad presumptious. She is talking as if it is a done deal and is inevitable. Perhaps her and her husbands lavish EU funded lifestyle has tainted her judgement somewhat.

So, here is a little reminder for her. NO to any EU president. NO to closer European ties. NO to giving more power to Europe.

Dribbled out by RantinRab at 5:50 PM

Gordon seems to have been embarrassed into some kind of half-hearted confirmation. Outmanouevred by Glenys Kinnock, for fuck's sake! Looks like the One-eyed might have been hoping the job would come his way. Oh, Lord ... the arrogance of these bastards ... it's priceless.

And NO to the trough swilling Kinnochios!

I do not recall being asked, in a democratic kinda way, who UKs' candidate should be for the Obersturmbahnfuher Reichs President should be.

If I had been I would certainly not have vote for seriel failure, warmonger Appointocratic lying Blair ( nor do I fancy his gobby bitchling Cherie as first slag of Europe ).
Recount please .

And NO to Lisbon2 here in Ireland.