Majority of Scots do NOT want independence 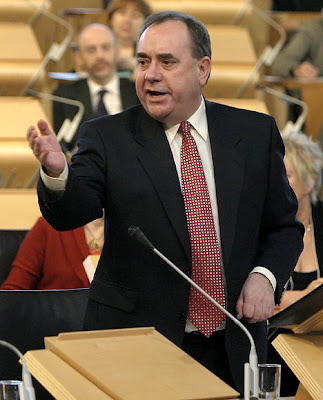 Alex 'I ate all the pies' Salmond

So, the 'big issue' for Fat Eck and his cronies appears not to be a big issue for the majority of us here in Scotland. When asked a straight question, (in a referendum on independence for Scotland, how would you vote?), only 38% said they would vote for independence and 54% opposed.

What's interesting about the poll is the following little nugget -

However, the pollsters also asked a separate question asking whether people agreed or disagreed that "the Scottish Government should negotiate a settlement with the government of the United Kingdom so that Scotland becomes an independent state" - the preferred wording of the Scottish Government for a future referendum.

Please note the words 'the preferred wording of the Scottish Government'. By using a bit of devious wordplay, an extra 4% agree to independence. The SNP are a devious bunch indeed.

Now, let me nail my colours to the mast. I care not a jot about Independence. It matters little to me, as far as I am concerned the SNP are just Labour in disguise, they are far too socialist. If there were a couple of other 'pro-Independence' parties that covered the political spectrum, then I may be interested. But no, there is just the SNbloodyP.

Devolution? No thanks. Just another layer of tossers who cost us a fortune sitting in their big fancy building talking crap about nothing that is really important. I want less government, not bloody more.

Dribbled out by RantinRab at 9:11 PM

I agree Rab, I can't see what the fuss is about. My entire adult life I've been listening to this debate. I even used to vote SNP. But I can't get my head around how the SNP tell us a political union of 4 countries can't work but a political union of 28 can. Or how being ruled from London is bad but being ruled from Brussels is good. Or that 6 MEPs will have a stronger voice in Europe than 72.

Wasn't Salmond kicked out of the SNP for his extreme socialist views?

was that the result of a poll of Scots, or a poll of people who live in Scotland?

You'd get different percentages, fer sure.

"Majority of Scots do NOT want independence"

Independence does not automatically mean an SNP government, in fact the Scots can vote any party they want into their parliament...

Now wouldn't that piss the architects of devoloution off!

And the converse would also be true Rab."Would you like To separated from your granny by a barbed wire fence?"
Trade will immediately stop, the shark filled moat at the border would be a danger to kids etc.
The Calman commission(sorry English readers, it's something that the Yanks call a circle jerk) totally ignores independence, which is strange as there happens to be a Government in Scotland which supports it; who's rating in the polls are higher now than when they were elected.
Beat *that* any unionist party.

Doesn't matter how things change, it all goes animal farm eventually no matter who's in power.

Wasn't Salmond kicked out of the SNP for his extreme socialist views?

Now I wonder where you heard that Alan?

An easy way for less government Rab is to get independence - then we won't be paying for Scottish MPs in Westminster. A good idea don't you think?

I don't think I could stomach the site of Fat Eck puffing his chest out and crowing if the SNP got their wish!

It's not like it would really matter one way or another, still be a SNP / Labour double act with SNP taking it's lead from Brussels when in office and Labour from London.

SNP's policy as far as I can tell seems to be 'Nothing much will change from how things are just now except we'll have oil money like Norway, only better and with cheaper beer 'cause fa's like us!' - except Norway's been putting all it's money in a bank for the last 30 years while we've been pissing ours up against the wall.

Beware of what you wish.

I call upon Fairy Nuff to grant you your wish and transfer down the Food Chain.


Your application to transfer to St Albans has been approved.

So let's get this straight.

You want less government, but in all honesty want Scotland to have 3 governments - Holyrood, Brussels and Westshithole?

Independence would remove at least one of those. Plus give the bonus of Scotland not being tethered to the lazy workshy, resource-poor English.

But you probably want the current situation of overgovernance to continue. Are you a fucktard by any chance?

I'd like to see the Pretendy Parliament take the place of the councils (they're only overblown councillors anyway) and out of the EU.

What so fucking special about retaining Westshithole in ANY capacity to govern over Scotland?

Get rid of it and all the twats in it and start afresh from there.

Oh I think we do a much better job of screwing the English when we do it from Westminster.

Aye well they don't need us screwing them, and we don't need Westshithole screwing us. So it'll be a improvement all round to get rid of the fucking place and let it become the English Parliament. I mean why would they want a load of Spongeing Unionist Britjocks in the place? I'm hoping with independence a lot of the Spongeing Unionist Britjocks will fuck off from Scotland and leave us in peace. Quite why they would think the English want them is beyond question.