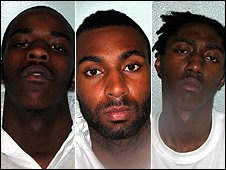 All three have been found guilty of murdering a sixteen year old lad, who showed them 'disrespect'.

I'm sure they don't care that they are going to jail. It'll be a badge of honour when they come out, probably in less than a decade. The hand wringers already have the excuses waiting to excuse their crime, deprived backgrounds etc etc etc.

I was going to go into a rant about the 'culture' and 'gangsta rap' shit that's spouted now and again but I won't bother. It bores me.

They were born bad and society has let them evolve into murders by allowing and encouraging them.

End of.
Dribbled out by RantinRab at 3:30 PM

How long before someone from the Guardian accuses you of being racist, despite not once mentioning race in that post?

yeah dude the be black you aint allowed to comment on the brothers. if there was ever a reason to bring back the death penalty these three are it now wait for the fucking righteous to knock down my door.

Oddly, on BBC News 24 at around 4:15 pm, although we were shown the statement by Ben Kinsella's father outside the Old Bailey and the Kinsella family press conference, no photographs of the perps were shown. Do you think there are some copyright complications which have to be sorted out before the photos can be shown by the state broadcaster? Or is there another reason?

Answers on a post card! I think we know the reason...

not wishing to stir the pot, but this is how the BNP get lots of votes this sis the sort of thing they love, BBC news item asian murdered in racist attack. then white kid murdered the racist word is not used even if the killers were of a different ethnic background. Gotta love the Biased Broadcasting Corp:

These people aren't British. The British do not behave like this. These people are imported from warring tribes in Africa. What on earth do we expect from them?

Yep, good old BBC. They wouldn't report anything that goes against their 'I'd Like to Teach the World to Sing' Coke advert, view of society.

Bastards like these should be left unguarded in the prison showers.

lmfao @ Sue!
Right on post Rab! Bravo!
They're going to be sentenced tomorrow - let's see just how much they get . . . 10 years between them? Out after 5 for good behaviour?
It's a joke!

I am for real

I suppose if the BNP were in power then they would be hanged.
Far too quick for me though. I'd flay them with barbed wire then bury them up to their necks in salt. I'd starve them for a week. Block each nostril with one of their bollocks. Then force feed them shit and piss via a high pressure hose.
That would teach em !

Can we start collecting cash. Then we give it to the first prisoner who kills these 3 fucks.
£1 in from me.

Is it just me or does all knife/gun crime seem to involve foreigners? Black, Somali, Asian whatever!
The best news, yet again for the BNP.

19 fucking years, but there's a rumour that they'll be in danger whilst inside. Excellent. Hope they live in fear and with plenty of bruises and injuries right up until a week before they are due parole, then stabbed in the perineum and left to bleed to death.

Meanwhile the Chipmunk regrets stabbing Brown, presumably because he did not bleed to death.

I regret NOT stabbing Brown...