Coward of the country? 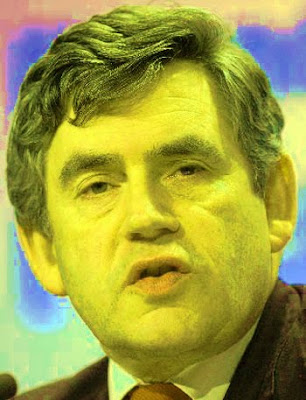 Ev'ryone considered him the coward of the country. He'd never stood one single time to prove the country wrong. His mama named him Gordon, the folks just called him yellow, But something always told me they were reading Gordon RIGHT.


So, it looks like wee Gordon is hiding behind his mama's skirt, too scared to go out and play with the other boys.

Gordon Brown is under pressure to accept Sky News' invitation to a leaders' debate after David Cameron and Nick Clegg agreed to take part.

What has he got to lose? After all he has lost everything anyway. Don't be a yellow belly Gordon!

If tempers got a bit frayed or someone spiked their carafes of water with PCP, who do you reckon would win?
My money's on Brown.
Cameron would be a bit old school Marquis of Queensbury and get mashed pretty early on, whilst Clegg looks a bit flash and might resort to the odd jab in the nads if it helped.
I reckon Brown's a bit of an old style bruiser though - he's been known to throw Nokias - and I reckon he'd be packing some brass knuckles.

I would say that Gorgon looks like a potential wife beater.

This might be, as you say, pish, but there's always the chance he'll be so bloody pathetic he'll get the sympathy vote. You know the English and the underdog syndrome - it's what got us into this mess in the first place.

I've heard he only starts on the women after his 8th pint of heavy...

Thanks for the giggle

He knows he'd be useless without a script, Rab, ffs he's fucking useless WITH a script!

This bastards so Yellow he now glows the Cowardly Colour!

I think - and hope - Brown is fucked either way:

If he enters the debate you know he's going to be shite. You need to be able to think on your feet & remember your lies - two of the many things he can't do.
If he doesn't - the 'cowardice' tag will do for him.

I reckon, he'll put his name down & then pull out on the day 'for reasons of ill-health'. Pity his old man, Pa Broon didn't 'pull out' 59 years ago.

If he turns up he will mess it up, if he bottles it he shows he is a coward.

Even if Jimmy McSnot appears, you don't really expect him to answer a single question that is put to him, do you?

Cameron faffs about too much and could have put Broon out of his misery months ago if he had the bollocks of, for example, a Ken Clarke. A Clarke figure would have dispatched Brown long ago, and probably even a couple of his assignees.

Clegg does fine occasionally at PMQs but he wouldn't be allowed on set with that folded sheet of paper he often jabs at Broon when he gets going. Clegg doesn't really stand for anything, as insane as Broon is, at least he stands for stuff, sometimes.....

Broon- just dismisses questions in a flippant manner, appears frequently offended at the gall of the other two questioning his fiscally unfeasible diktat.

I read somewhere that Eck Salmond may be drafted in to appeal to us lot. My money would be on that lucky wee bastard coming out top if he were to appear.

Just offer Fat Eck a free pie. He'll be there in a shot.