Thanks very much, Comrades.... 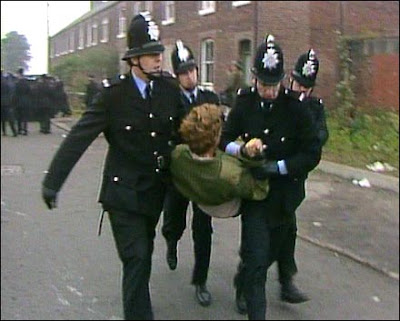 'Fucking pigs! Our leader earns more than you four put together'

The skirmish between the Communications Workers Union and the Royal Mail which is ongoing at the moment has got me thinking.

There are millions of union members in Britain, paying their subs week in and week out. Taking a wee bit of comfort that they have a huge organisation to fight for them and protect them if and when needed.

But I wonder how many members know how much the 'leaders' of the unions rake in each year. Can the leaders honestly say that they know what their members are going through, what issues face them on a day to day basis?

When you see the salary and benefits package they have, I have my doubts. Take a look -

Derek Simpson now receives nearly £200,000 in pay and benefits, with his pay package increasing 17 percent this year. He also has the right to stay in his £800,000 house in Hertfordshire until he dies, after which his partner will be able to remain there at a heavily subsidised rate.

Simpson demanded that the union subsidise his accommodation to "make it affordable" - a perk worth about £40,00, bringing his total remuneration to £194,252.

The above figures are from January this year from this site.

And the other week Unison, who have fought against cuts to public sector pensions, announced it is cutting back the pension scheme for its own workers. How deliciously ironic.

So, to sum up, union leaders are troughing pigs. Much like their counterparts in Parliament.

Dribbled out by RantinRab at 12:22 PM

to paraphrase a well known ditty:

The working clarss
Can kiss my arse,
I've got a Union job at larst.

Taking it out on soft targets, I see? Trying to earn yourself a 'Daily Mail REPORTER' job holding hands with Littlejohn ?

a) Those wages are good no doubt, but you're hardly aiming at the right targets. There are private salaries out there that are 1000 times the size of those, and still dished up as rewards for driving a company down. I'll leave it to you to work out which is more outrageous and an insult to ordinary workers;

b) Are Union leaders supposed to live like St Frances of Assisi or something? What exactly is your point? If you've ever been in a union (or a job where unions exist -as a matter of fact) you'd know that for convenors and area managers (let alone the highest ranks) there's an enormous amount of travelling involved. It ain't no 9-5 job and you can kiss goodbye to family commitments most of the time. Like...you mention fuel costs? Are these people supposed to fork out for their own petrol when they're attending 20 tribunals/disciplinaries a day to support workers in need of support???

Instead of those people who are trying to defend jobs, wages, pensions etc. Why dont you pick on bank executives, CEOs and those who wield real power?

It's the hypocrisy of keeping their own pensions topped up, while cutting it for the rest of their staff.

Lord, I am trying to steer clear of morons like "Claude", but their view of Utopia remains enshrined in concrete.

Top to bottom: - Evil capitalists, Wholesome champagne Socialists, case closed. Then when I happened upon "Claude's" inverted commas "Blog", well what do you know he's a U.A.F. supporting Muppet.

You can smell them a mile off.


" Why dont you pick on bank executives, CEOs and those who wield real power?"

These wankers get plenty of attention on this blog. Don't worry.
And Union bosses have more power than you realise. They can bring down governments if they decide to. Ted Heath ring any bells ? Or the abuse Kinnochio got for trying to stand up to them ?
Brown will be kissing the postal workers arses soon enough if he thinks it will stop the strike. If he can get in there before Mandleslime.
Union bosses are now seriously taking the piss with their expenses. £400 a night hotels because they didn't fancy driving home 20 miles. Haven't they heard of fucking taxis ?
Wankers with views like yours have turned the UK into a 3rd World toilet.

Wow, nice, welcoming and polite on this "blog", arent yous?

All this aggro just because someone disagrees with you.

Why do you allow a comments option if that's the effect it has on you?

Interesting how I'm automatically a UAF person.
Why? I'm not. I've never been. Nor am I planning to.
But perhaps for tribalist black and white-tinted eyes this is impossible to grasp.
You've got to be EITHER one or the other, right?

"And Union bosses have more
power than you realise. They can bring down governments if they decide to. Ted Heath ring any bells ?"

Do you realise how ridiculous this sounds? You're clinging onto something that happened 35 years ago! Ted Heath! And I suppose next you'll mention what happened under George III in 1790...

"£400 a night hotels because they didn't fancy driving home 20 miles. Haven't they heard of fucking taxis ?
Wankers with views like yours have turned the UK into a 3rd World toilet".
Nice language there. Very welcoming. And your source? The Daily Mail?

Have a nice day.

The whole idea of a Libertarian blogsphere is that your allowed to emit your views, and then so the fuck are we.

We've listened to the views from your side of the self righteous fence, unabated now, for thirteen long Years. That's why we've no interest in going into the nitty gritty, of so called deep thinking that masquerade as Socialist policy agendas.

You spout, we adhere.

Isn't that about the strength of the last thirteen Years of Socialist "government"?

Have a nice life.

I was going to argue with you but ... you're not wrong.

My ex father in law is a union/Labour red flag flying twat...

He always took the moral high ground...I have never known a more corrupt man in all my life..he did well out of being a Labour councilor. The Labour council in Merthyr Tydfil make the masons look like an open welcoming society...

I know of death threats and underhand dealings by that council that would make your hair turn into 15 year old gravy.

ohh I should have said the Labour Council "MADE" not "MAKE".....they were kicked out recently...

Claude, sweety. Disagree, please! But don't just come in here like some weed mincing into a biker's bar shouting "Primroses are my favouritest flowers!" because you will get a dim reception. Your socialist blandishments are null and void here because these people are hardened arseholes who speak a radically different language.

I mean for instance I totally disagree with Rab for being a fucking porridge wog bastard and yet he shows no sign of budging an inch! This man needs sorting out, and you're the only man to do it, go for it Claude!

Absolutely none taken, my good man!

How come some bastid always brings the masons into it .. lol