Rat looking for a new home? 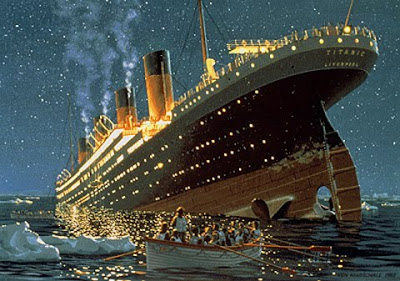 
So, the ship SS Labour Titanic has ploughed full speed into several icebergs and it is only a matter of time before the hole ridden wreck slips beneath the waves to a watery grave.

The officers and crew are busy re-arranging deck chairs on the deck, shouting 'don't panic' to the unfortunate passengers. 'Captain Brown is the man to save us. I know he was at the wheel when we hit the icebergs but that doesn't matter now, he saved the world and he can save us!'

If you listen carefully, you can just about hear the band playing. Knowing they are doomed, they try to raise the spirits of the stricken ship. Above the screams of the passengers and the death groans of the ship, the NuLabour anthem 'Things can only get better' wails through the air.

Refusing to issue the order to abandon ship, the Captain stubbornly carries on. Seemingly unaware of the impending fate of his ship he remains at the controls. His officers and crew getting more anxious by the minute. 'I wonder when he will give the order' is on everyones mind.

A few hundred yards away, one of the precious lifeboats seems to be adrift. Putting his telescope to his eye, (there is no point in Captain Brown owning a pair of binoculars), the good Captain trains his beady eye on the lifeboat bobbing up and down on the cold icy sea.

'What a bastard', he shouts. 'What a treacherous, self serving rat'.

The officers surrounding him raise their own telescopes and peer at the fast disappearing boat.

There is Mandelson, rowing for all he is worth. Deserting the ship he has sailed on for many years. He knows it is a goner.

He seems to know where he is rowing to. Approaching from the horizon, there is another ship.

'I can serve my country with you' he wails at the fast approaching ship. 'Please let me aboard'.

I can think of a few positions that would suit Mr Mandelson that would also serve the country.. .. .. one of them involves being on top of a bonfire .. .. .. registered government gallows tester.. .. .. NCAP crash test dummy .. .. ..

Mandy wouldn't go to the Tories (not that they'd want him), this is just more "mind games" from the old queen. It'll put the wind up Brown and annoy the Tories by suggesting that they'd actually need him.

No, when Labour are kicked out on their treacherous arses next year, Mandy'll have to go back to toilet trading full time.

At least Captain McFuckwit of the SS Labour Titanic will be able to make his sneaky exit in full knowledge that he left it best placed of all to hit the iceberg!

Mandy really is a self serving cunt isn't he?