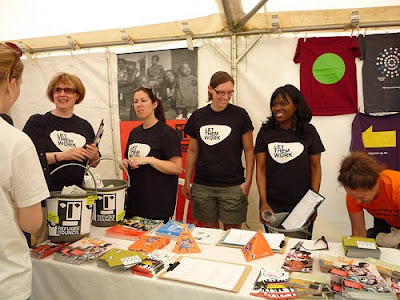 'I really don't know how I manage to sleep at night, with all the worry and everything...' said her on the left with the glasses.

So, according to The Refugee Council, granting asylum to a 'small number' of 'vulnerable immigrants' currently residing in the illegal camp in Calais might be the 'right solution'.

Following the announcement by the French that they are to clear the site known as the Jungle, Donna Covey, who is Chief Executive of The Refugee Council, popped up on the BBC's Today programme (where else) to spout her nonsense. Her previous roles include being chief executive of Asthma UK and Director of the Association of Community Health Councils for England and Wales. She spent many years at the GMB Union, where she was the National Officer responsible for equal rights, and a member of the TUC General Council.

So, Ms Covey doesn't care about them really. It's just a job to her. She is just one of many, many people who has made a career out of 'issues'.

I'm not about to have a debate about immigration. The only thing I'm going to say is that I support migration to the UK provided that people come here for the right reasons and that they have something to offer this country and will not be a drain on our rapidly decreasing resources.

I wonder if Ms Covey is genuinely concerned for the people currently residing in the Jungle, or is she using them to garner cheap publicity for her employer. I'm sure somewhere in her performance objectives for this year lurks the phrase 'raise the profile of The Refugee Council'.

If that is the case, job done. Give the woman a salary review!

"Her previous roles include being chief executive of Asthma UK and Director of the Association of Community Health Councils for England and Wales. She spent many years at the GMB Union, where she was the National Officer responsible for equal rights, and a member of the TUC General Council."

Nothing specialised, then. Just a kind of all-round righteous cunt.

Yep. These fake charities are manufacturing businesses. Their product is a warm fuzzy feeling of having “done something”. Their biggest customer is the state. They advertise on the BBC, attempting to persuade their customers that if they don't buy this brand of W.F.F. right now, all their friends will desert them and nobody will think they're cool any more. (Go on, tell me I'm wrong. Never underestimate the power of fashion over reason in politics.)

Their staff may be unemployable in any other business, but they know exactly how to rake in the cash for the one they're in.

Career 'issuists' always annoy me intensely. Why, because they generally espouse views they do not personally believe in. You know, like insurance salesmen. They want you to be fully covered to get their commission, but haven't got a scrap of cover themselves!

Let them all in, especially the Afghans. We need to add a bit of colour and vibrancy to these isles...

I think I found a new fake charity today.

Nice to see it has 45 employees and 5 volunteers.

How do people get these jobs? - spending other people's money on...er...fuck all really.

I smelt this coming the minute the Frogs said they were going to clear the camp, but then I'm just an old cynic!

You can just imagine trying to have a rational debate with that little gang, can't you?

"On what basis do we judge who the 'vulnerable' few are?"

(Ha! WV = picts. Now, those are the people to ask about the value of uncontrolled immigration.)

Her employer IS the Government.

From where does the mostpart of her funding come?

I notice they're all wearing "Let Them Work" Tee shirts. The refugees could do that in France, or any of the other countries they passed through on the way. No, they want to get to these septic isles because they WON'T have to work....

Under the Westway said...

There are only two choices really. The first is to pretend to control but in practice allow unrestricted immigration. The second is Fortress Britain and deportations repeated for as long as it takes for people to get the message: Go Somewhere Else.

We stand with Two Thousand years of courage and determination to keep this country for the people who live and work in it. Why don't these spurious asylum seekers do the same in their own?

It is because they want a free ride and because credulous women like Donna Covey are paid to spout this garbage, which gives those who want to come here and sponge on the system the impression we are an easy touch.

As far as I am concerned they can fack off back to whatever shithole they came from and stand like men, as we did throughout our history, and fight for their country.