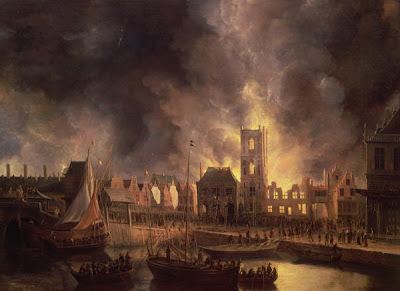 The residents of old Amsterdam had enough of the wheelie bin nonsense...

Yet again, the relentless onward march of the power mad, jumped up, Gestapo like little clipboard wielding fucks that infest town halls nationwide is laid bare for all to see.

So, for the shocking 'crime' of leaving a wheelie bin out longer than it should be every adult in the household will be fined £110. Fan-fucking-tastic.

Zoe Kozlik, 21, and her three housemates had to pay £110 each to Leicester council for breaking the new rules.

Her father Chris Kozlik told The Daily Mail: "All my daughter did was leave her bin out past when it should have been. You'd get less for beating somebody up. Power has gone to their heads."

Leicester City Council, which has adopted the fines-for-all strategy, said that the fines were a last resort after the householders had been properly consulted.

"Our city wardens give letters and information to householders where bins are left outside," a spokesman said.

Right, so Zoe and her chums HAD to pay the fine. No questions asked, just pay up you bastards. And who are the 'city wardens' that patrol our streets? The modern day equivelant of the Nazi Party's brownshirts? Overfill your wheelie bin and you can expect your door being kicked in at three in the morning?

The point is, why moan about it? Do something about it. Don't play their game. Get together with others on your street and protest. A road blocked with wheelie bins or march down to the town hall with your bins, stack them up around the building and set fire to them. Maybe then these jumped up little bastards will get the message that they serve us, not the other way around.

So Britain, stop writing poncey letters to the Editor of the Daily Wail or the local rag. Remember, actions speak louder than words.

I have been trying to start a revolution for quite a while now. Getting a following is quite difficult and as soon as you mention killing the cabinet plans, no-one seems interested. I never even got to the military coup conversation! The vote for me as king went well though.

Ach, I know what you mean!

It is only a matter of time before residents, disgruntled and upset, start fighting back with spray canned slogans and setting fires to town halls and civic centres.

If the council are robbing money off the people, the people will make them earn every penny, in repairs. And that would just be the start.

Unfortunately, I think councils are ready for that event and will be waiting. Any would-be justice seeking vandals will have to be extra resourceful with their unconventional protesting.

And in all fairness, the councils have deserved it. A few more atrocities, a little more abuse of power past endurance, Rab, and it will all kick off. And the bastards have only themselves to blame.

Well said Rab. Not only do they want me to have my kitchen looking like a mini recycling plant, if they start this here then I will do something serious.

Spot on Rab. I don't think it will be much longer before people say enough is enough and tell them what to do with their arbitrary fines.
Flossing the cat

It is only when the most placid and law-abiding people are sick to death of compliance with Town Hall Nazis that anything will happen. Regrettably, the apathy is like a huge wall protecting those fuckers.

I am in a constant battle with my local council and will continue to be a thorn in their side.

Including the chief exec and lead councillor on all correspondance is my favourite trick.

Last time they failed to collect my bin, I emailed them a shitogram about 8pm. My bin was empty by 6.30am and by 9am, the chief exec and councillor were demanding explanations from their untermongs.

By the way, have you noticed what a bunch of chippy cunts the people who operate the council tips these days?

I'm in Leicester and just about everyone in my area leaves bins out and many chuck old sofas, mattresses, building rubble etc out on the street too but no sign of any of these 'fines for all'. (Although they are apparently writing to the local mosques to tell them about the free bulky collection service)
J

I wonder what percentage of these ill-gotten gains finds its way into the black hole of Brown's empty coffers at the Treasury?!

I recommend you all look to the Mayor of Doncaster for his views and thoughts, which the majority ie. us agree with. The establishment hate him, for looking to save the taxpayers money and offer the services that a council should be offering. He is also stopping funding (again with our money) minority shindigs.

A superb turn of phrase. I may well make that into a t-shirt.