Dave, more of the same? 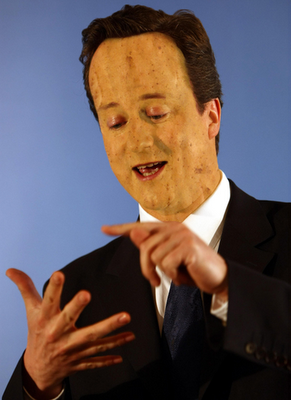 Take a look into the future. A couple of years or so.

Can you see any difference in the way the country is being run? Radical policies being implemented to reverse our fortunes? Probably not.

Labour will, bar a miracle, be in opposition. Cat calling and throwing mud at the Tory government whilst forgetting that they caused the mess. Call me Dave will be bumbling along like a posh Mr Bean, not knowing what to do. That's if he is in charge...

Do the Conservatives inspire you? Or will they get in power because Labour are so bad?

We all know the answer to both.

We need another Thatcher figure. Someone with the balls and personality to get to grips and sort out the mess of thirteen years of Labour mis-government. Someone who will tell the country the way it is, without squirming and telling half truths and bare-faced lies.

Call me Dave is not that person. When he talks, he doesn't make you listen. He is the political version of muzak. You can hear music but you can't quite make out what the tune is. Stand up man and just lay it on the line. The country is on it's knees, tell us what NEEDS to be done not what you think we want to hear.

I predict that Dave will not be Prime Minister in two years. A leadership challenge will happen if he does not quickly get to grips with the immense problems caused by the socialists and demonstrates strong leadership. He is a career politician with no experience of the real world and that, people, is a concern.

Thanks to captainff for the pic!
.
Dribbled out by RantinRab at 2:35 PM

Yep you're right. The old saying "doesn't matter who you vote for, the government always wins" was never more true. Since the expenses scandal there must be millions of people who'd like to vote for anyone else other than the three main parties, but they won't because the first past the post system is rigged against new parties, and the whipping system is rigged against independents. So the Tories will get in and it will all start over again. Arse!

It a sickener that LibLabCon just grab onto power, and hang on to it for as long as possible, whilst the country goes down the shitter.

How many of Labour's laws are going to be repealed when there's a change of government? The tories that I've spoken to say "Wait and see". The honest answer is "None".

As far as I'm concerned, all politicians are in it for their own self-aggrandissement, none more so than the champagne-swilling cretins of New Labour.

It's all about their own power, and fuck all to do with doing the best for the country.

You don't think that the potatocameron is up to the job?

He's the least offensive option at the moment, isn't he? And yes I agree that's not really a recommendation for the role of PM .. .. ..

Bring on Dan Hannan or Nigel Farage to sort this fucking mess out! Cameron is a complete nothing - he's just a more appealing nothing than any arsehole moron in Labour.

Malcolm Rifkind should have been elected as Tory leader. A very intelligent man, and can always hold his own under pressure. Unfortunately leadership and intelligence in British politics do not seem to mix.

Alex Salmond must be terrified that Spameron isn't a powerful enough bogey man to frighten the Scotch into a vote for independence.