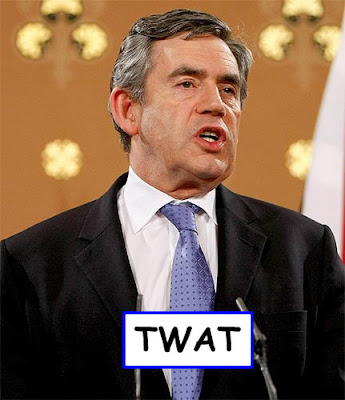 You've got to ask yourself why The Prime Mentalist rubber stamped a special forces operation to save the twat of a journalist Stephen Farrell. Negotiations for his release were well underway and in all probability would be successful. But no, Gordon had to go steaming in thinking he was a political Rambo rather than the political Norman Wisdom that he really is.

Farrell had been warned many times not to venture into the area as it was extremely dangerous after the bombing of fuel tankers that had been stolen last week, with many civilian deaths. Clearly the lure of glory and a journo award or two had clouded his judgement. I wonder how the families of the dead resulting from his rescue feel.

So, who instigated the Hollywood Blockbuster style rescue? There is criticism from Army chiefs about the operation and this speaks volumes. Did Gordon or someone within the cabinet propose the rescue? And why were the normal channels used in situations like this not allowed to reach a conclusion?

Perhaps The Prime Mentalist was hoping for a 'good news' story from Afghanistan to crow about, but unfortunately the reverse Midas touch that he seems to have has struck again.

Update - Gordon is blaming others

Much as I agree with this notion, I thought you might mention my Tweet 4 hours ago suggesting it. Are you going to compare the Labour govt with the Taliban tomorrow? I may as well stop with my cynical ideas altogether.

So what do you think about the Taliban / Labour govt similarities?

I think you may be on to something there.

I reckon he must of seen footage of the 1980 US embassy raid from the SAS and got a little over-excited. So a journalist got captured? It would have been one less arsehole in the world. Now, because of it we've got one less soldier. Nice one, Brown. Wasn't even a british bloody journalist. Couldn't the yanks send in one of their own teams of commandos?

Uncle
It was the Iranian Embassy that was raided.
Rab
Gorgon is now saying it was all the boyMillibands idea so he must have changed his mind about it being a good idea. Macavity might get away with it again.

I read it was Miliband and Ainsworth who gave the go ahead and Brown was merely 'informed'. He's backtracking like crazy on this one.

This journalist is getting pelters for this. Could someone direct me to the statement where he asked to be rescued please.
Negotiations were ongoing, the PM asked the SAS to go in ( although he's now pointing the finger at Millipede and jobsworth).The translater stood up during a firefight and started screaming. He looked like a local so got shot. Every schoolboy knows that when the bullets start flying you hit the deck. Don't these translaters get the minimum of training ?
Most folk would shit themselves at the thought of going to Afghanistan yet we want instant news . Real news not bullshit lies from the government. So we need a steady stream of barking mad journalists to risk their lives every day over there. He didn't ask to be rescued and is of course thankful. We've lost another brilliant soldier in a war that we shouldn't be involved in.

The journalist would EXPECT to get rescued.

You're Jokin Rab of course.
Most journalists end up dead. Thousands have given their lives as governments refuse to negotiate with terrorists. Or spend years in prison before being untied from a radiator and going home a wreck of their former selves.
Northern Ireland, Gaza, Beirut, Afghanistan, Iraq, Pakistan, North Korea, Russia, Bosnia, Chechnya etc are littered with the bodies of murdered journalists

It doesn't matter a gnat's whisker whether the journalist expected to be rescued or not. It was clearly a very bad call, and the egregious bastards in Westminster are ducking the flying shit like it was a hail of Taleban bullets.

Sorry avacado muncher, my mistake. Mind you, I wasnt even 2 years old at the time so can't be expected to remember all of the details.

Norman Pitkin, surely, rather than Norman Wisdom. Pitkin was the simple character, Wisdom was a canny fellow before his recent deterioration.