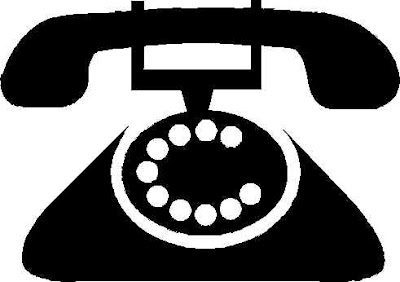 I am your friend, honest...


We have all heard that 'Minister for Digital Britain' (?) Stephen Timms thinks the proposed fifty pence a month tax on landlines should be law before the next election.

"Nothing has been derailed. It is full steam ahead," he told BCC news.

Now correct me if I am wrong but I'm pretty sure that Maggie Thatcher sold off the telecommunications network some time ago and since then many different companies compete for our business. None of which are in the public sector.

So why would the government be so keen to force all of us with a landline telephone to cough up another six pounds a year in tax?

What has it got to do with the government who has broadband and who has not?

Being of a slightly suspicious nature (and wearer of the obligatory blogger's tin-foil hat) I have a couple of reasons for them being so keen on the idea.

If every household in the UK has broadband access it would be so much easier for them to keep tabs on all of us. Everyone who uses a computer will be under the beady eye of big brother. I suspect we are already being monitored but if everyone has t'internet then EVERYONE is a target.

I bet that soon after the legislation becomes law another government proposal for subsidising computers and cheap internet access looms on the horizon.

And if you think that I am sounding a bit paranoid, it's because I am.

Can you blame me?

Dribbled out by RantinRab at 6:36 PM

The thing is, once everyone has internet, how will those who can't currently afford a connection pay for it once the government has magicked one to their house? Do benefits claimants get a broadband allowance?

How will the government ensure it happens short of nationalising the cable companies?

Seeing how theres a debate rumbling about paying a tax on every TV in the form of the licence fee, just how are people going to react to a new "landline tax"? Badly I reckon.

May I suggest you look into newsgroups Rab. With 256-bit SSL encrypted newsgroup binaries the man can't see what you're downloading to your machine. That'll fuck Mandelson off. No more parties with Geffen for him!

There's a thing called 'Government Gateway': ostensibly the means for streamlining and centralising all government services, tax, benefits, duities, the lot. Allt he information available on an information-sharing basis to all authorised government agencies and local authorities.

Anybody who isn't worried about 'mission creep' when they hear about that scheme (it's active, but voluntary, at the moment) has been living in Galaxy X9 for the last copule of decades.

You're not paranoid, Rab. The authorities really do believe that it is essential that they know everything about us, and have the means to control us.

Paranoia is healthy.....it means that your aware that everyone is out to get you.

They all want my club card.....well they aren't having it.

I prefer the joy of giving my points to the person standing behind me at the cue....its like Christmas day to them when I ask if they want my points.

Rab your a light weight paranoid......I have swords ready for when the zombies come!!!!

Also I have been thinking about zombies and how to beat them!!!

I thought a good way to get rid of them would be to get a water pistol and fill it with petrol then squirt said zombie as he comes for you...then hide behind a bush and throw a match at him....before long the zombie wont be able to see because of the flames and eventually he will become incapable of moving as the decaying muscle tissue goes up in smoke.

Repeat until the earth is clear of the pesky blighters!!

I don't have a landline ( soooo Twentieth Century ) but my old Mum will be thrilled to know that she will be being taxed on hers to fund porn-seekers.
Undoubtedly this sorry scheme is really about enhanced govt. control of the net.

Only a few months left to them, Rab, and still they carry on with their totalitarian tactics, oblivious to the fact they've been rumbled on so many levels. They just can't stop themselves!

This is not being done for any good or altruistic reason. However, despite voting fraud (the Labour Party's friend) I think they'll be out come the next election. So fuck them, and fuck their tax.

Yir right Rab, they want total control over everything. We'll soon have to phone in for permission to go for a Gladys Knight!

Incinerating zombies is not very health and safety. What I usually do is creep up behind them and squirt foam loft insulation up their bums until they pop.